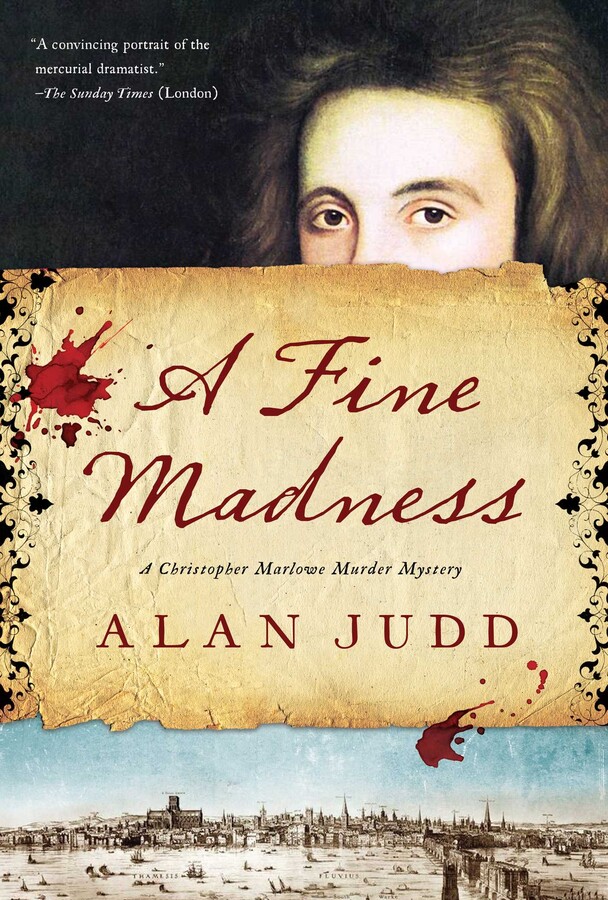 A captivating espionage novel that explores the life of theatrical genius—and spy—Christopher Marlowe, whose violent death remains one of the most fascinating mysteries of the Elizabethan Age.

In Elizabethan England, the queen’s chief spymaster, Francis Walsingham, and his team of agents must maintain the highest levels of vigilance to ward off Catholic plots and an ever-present threat of invasion from Spain.

One agent in particular—a young Cambridge undergraduate of humble origins, controversial beliefs, and literary genius who goes by the name of Kit Marlowe—is relentless in his pursuit of intelligence for the Crown. When he is killed outside an inn in Deptford, his mysterious death becomes the subject of rumor and suspicion that are never satisfactorily resolved.

Years later, when Thomas Phelippes, a former colleague of Marlowe’s, finds himself imprisoned in the Tower of London, there is one thing that might give him his freedom back. He must give the king every detail he is able to recall about his murdered friend’s life—and death. But why is King James so fascinated about Kit Marlowe—and does Phelippes know enough to secure his own redemption?

Alan Judd is the author of eleven novels and two biographies. Chosen as one of the original twenty Best Young British Novelists, he subsequently won the Royal Society of Literature's Winifred Holtby Award, the Heinemann Award, and the Guardian Fiction Award; he was also shortlisted for the Westminster Prize. His most recent novel to be published in America is The Kaiser’s Last Kiss (Atria). He lives in Sussex, England.

“Superior prose is a plus. This clever recreation of a complex life stands above the many other fictional explanations for Marlowe’s death. Fans of Iain Pears will be engrossed.”

“As the story unfolds, the details unveil the complexities of Marlowe’s proclivities, ranging from political machinations to a hidden gay relationship. But does Phelippes have enough information about Marlowe to really gain his freedom? And what exactly does the king intend to do with the information? Judd delivers a truly intriguing and well-researched premise in this historical mystery.”

“A vivid picture of late-sixteenth- and early-seventeenth- century England, a cauldron of in-fighting among rival courtiers, fueled by religious conflict, espionage, and government-sanctioned torture. Judd's tantalizingly ambiguous portrait of the dramatist and man of action may be the most textured.”

"Alan Judd knows more about the secret world than any other writer living. To have him turn his expert eye on the world of Christopher Marlowe—and on Francis Walsingham, the Elizabethan George Smiley—is a special kind of literary treat.”

"Well-researched splice of fiction and historical fact. A vivid tale of espionage, dissent, and intellectual discourse, with the past brought to teeming, pungent life.”

"Skillfully evokes the atmosphere of suspicion and fear, painting a convincing portrait of the mercurial dramatist while still allowing Marlowe to remain something of the enigma he has always been.”

– The London Sunday Times Historical Novel of the Month

"A masterful storyteller with an intricate knowledge of his subject.”

"At the heart of this spy novel stands the mercurial, enigmatic figure of Christopher Marlowe, whose premature death is a tavern brawl has proven an enduring mystery. Draws on the real records of Marlowe’s death and the secret service to craft a gripping story.”

"Judd keeps us guessing until the last pages of this taut, clever, thought-provoking thriller.”

By clicking 'Sign me up' I acknowledge that I have read and agree to the privacy policy and terms of use. Free ebook offer available to NEW CA subscribers only. Offer redeemable at Simon & Schuster's ebook fulfillment partner. Must redeem within 90 days. See full terms and conditions and this month's choices.
Thank you for signing up, fellow book lover!