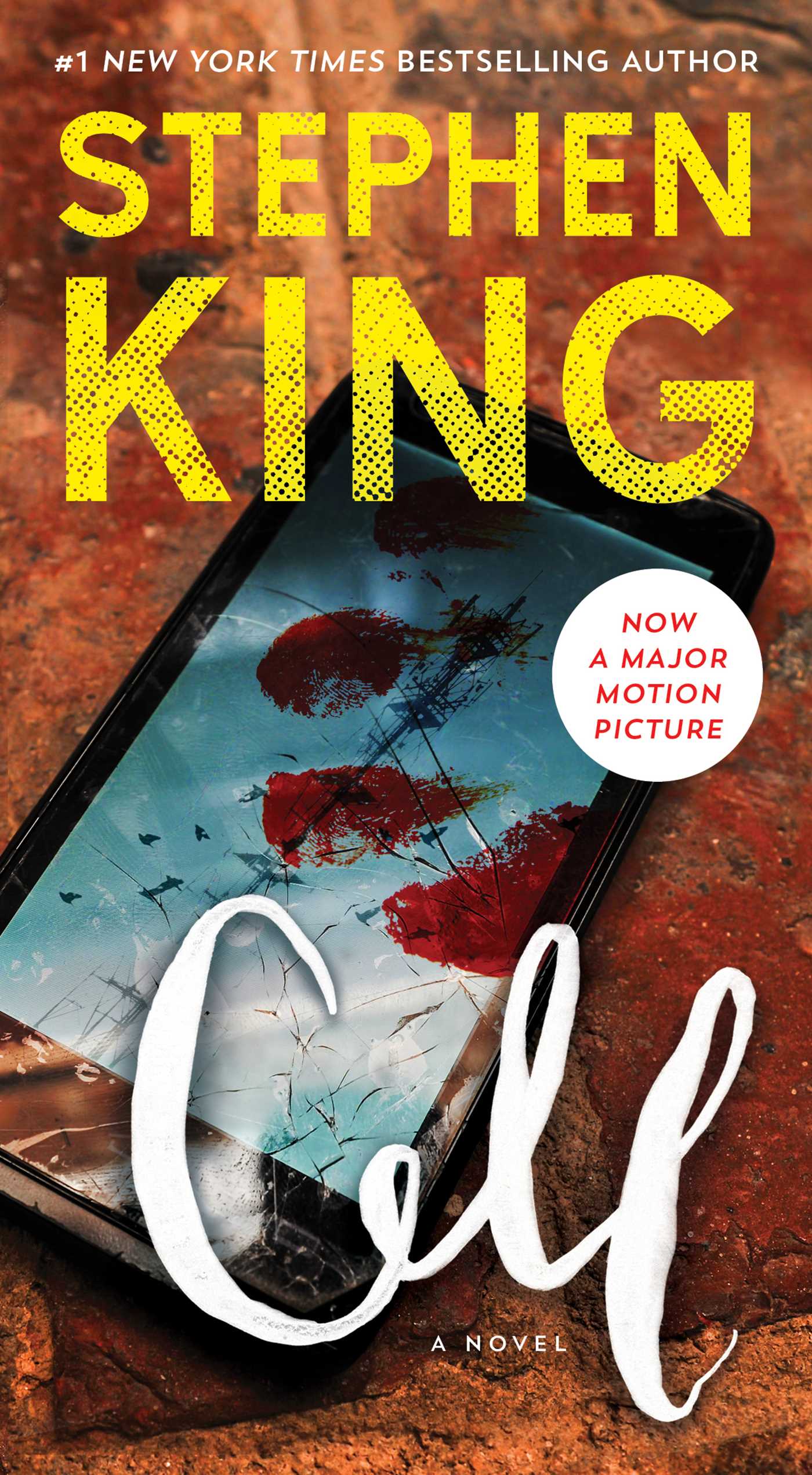 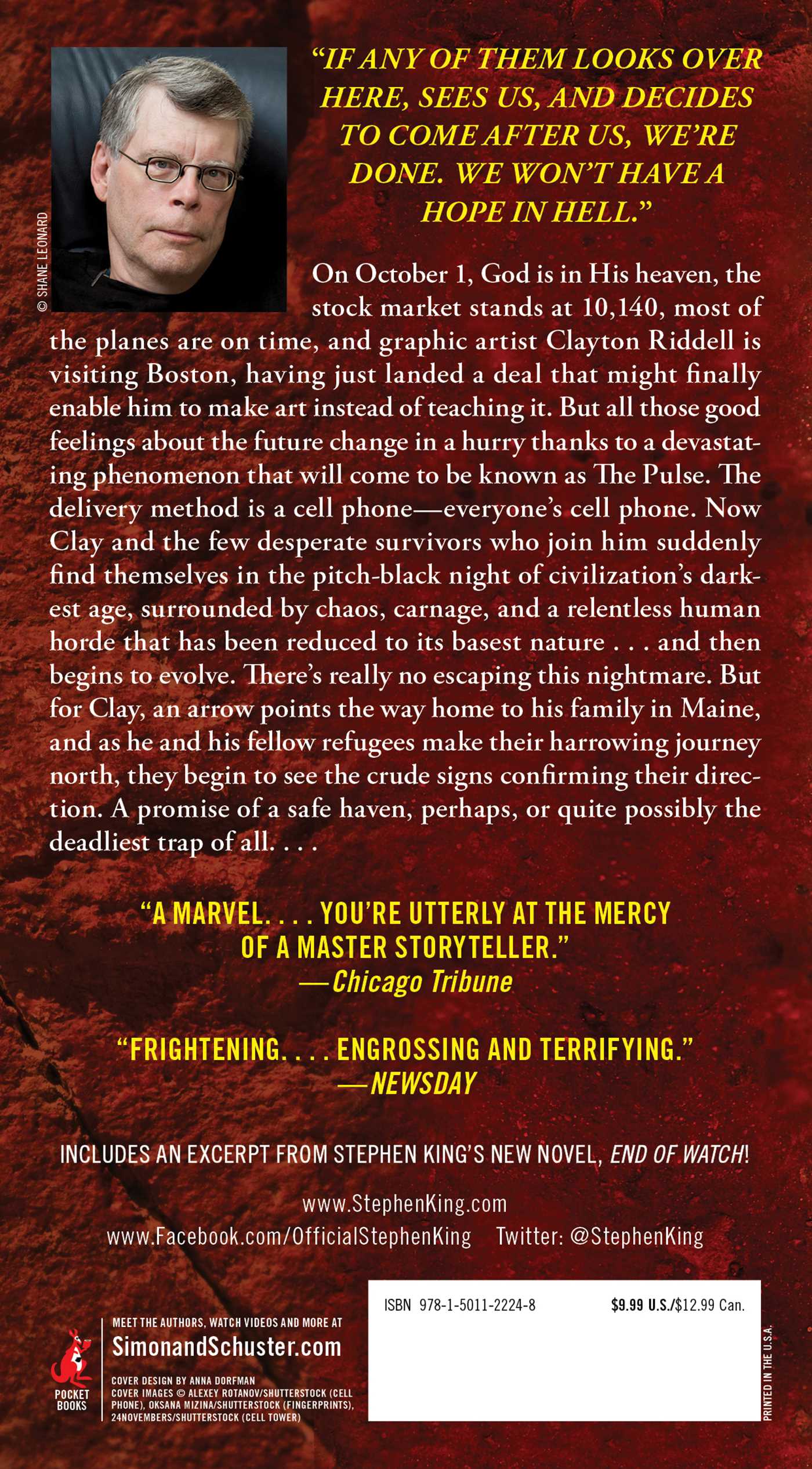 The next call you take could be your last in this terrifying #1 New York Times bestseller by Stephen King—now a major motion picture starring Samuel L. Jackson and John Cusack.

“If any of them looks over here, sees us, and decides to come after us, we’re done. We won’t have a hope in hell.”

On October 1, God is in His heaven, the stock market stands at 10,140, most of the planes are on time, and graphic artist Clayton Riddell is visiting Boston, having just landed a deal that might finally enable him to make art instead of teaching it. But all those good feelings about the future change in a hurry thanks to a devastating phenomenon that will come to be known as The Pulse. The delivery method is a cell phone—everyone’s cell phone. Now Clay and the few desperate survivors who join him suddenly find themselves in the pitch-black night of civilization’s darkest age, surrounded by chaos, carnage, and a relentless human horde that has been reduced to its basest nature...and then begins to evolve. There’s really no escaping this nightmare. But for Clay, an arrow points the way home to his family in Maine, and as he and his fellow refugees make their harrowing journey north, they begin to see the crude signs confirming their direction. A promise of a safe haven, perhaps, or quite possibly the deadliest trap of all....

Cell 1
The event that came to be known as The Pulse began at 3:03 p.m., eastern standard time, on the afternoon of October 1. The term was a misnomer, of course, but within ten hours of the event, most of the scientists capable of pointing this out were either dead or insane. The name hardly mattered, in any case. What mattered was the effect.

At three o’clock on that day, a young man of no particular importance to history came walking—almost bouncing—east along Boylston Street in Boston. His name was Clayton Riddell. There was an expression of undoubted contentment on his face to go along with the spring in his step. From his left hand there swung the handles of an artist’s portfolio, the kind that closes and latches to make a traveling case. Twined around the fingers of his right hand was the drawstring of a brown plastic shopping bag with the words small treasures printed on it for anyone who cared to read them.

Inside the bag, swinging back and forth, was a small round object. A present, you might have guessed, and you would have been right. You might further have guessed that this Clayton Riddell was a young man seeking to commemorate some small (or perhaps even not so small) victory with a small treasure, and you would have been right again. The item inside the bag was a rather expensive glass paperweight with a gray haze of dandelion fluff caught in its center. He had bought it on his walk back from the Copley Square Hotel to the much humbler Atlantic Avenue Inn where he was staying, frightened by the ninety-dollar pricetag on the paperweight’s base, somehow even more frightened by the realization that he could now afford such a thing.

Handing his credit card over to the clerk had taken almost physical courage. He doubted if he could have done it if the paperweight had been for himself; he would have muttered something about having changed his mind and scuttled out of the shop. But it was for Sharon. Sharon liked such things, and she still liked him—I’m pulling for you, baby, she’d said the day before he left for Boston. Considering the shit they’d put each other through over the last year, that had touched him. Now he wanted to touch her, if that was still possible. The paperweight was a small thing (a small treasure), but he was sure she’d love that delicate gray haze deep down in the middle of the glass, like a pocket fog.

Stephen King is the author of more than sixty books, all of them worldwide bestsellers. His recent work includes Fairy Tale, Billy Summers, If It Bleeds, The Institute, Elevation, The Outsider, Sleeping Beauties (cowritten with his son Owen King), and the Bill Hodges trilogy: End of Watch, Finders Keepers, and Mr. Mercedes (an Edgar Award winner for Best Novel and a television series streaming on Peacock). His novel 11/22/63 was named a top ten book of 2011 by The New York Times Book Review and won the Los Angeles Times Book Prize for Mystery/Thriller. His epic works The Dark Tower, It, Pet Sematary, and Doctor Sleep are the basis for major motion pictures, with It now the highest-grossing horror film of all time. He is the recipient of the 2020 Audio Publishers Association Lifetime Achievement Award, the 2018 PEN America Literary Service Award, the 2014 National Medal of Arts, and the 2003 National Book Foundation Medal for Distinguished Contribution to American Letters. He lives in Bangor, Maine, with his wife, novelist Tabitha King.

SEE ALL
See more by Stephen King
Thank you for signing up, fellow book lover!